The Department of Defense announced a million dollar weapons order to Saudi Arabia just days after the Saudi government is suspected of dispatching a hit squad to torture, murder and mutilate the US-based, Saudi journalist Jamal Khashoggi. On October 6, just three days after Khashoggi was allegedly killed in Saudi Arabia’s Istanbul consulate, Trump’s Pentagon announced a new $8 million order for Lockheed Martin to provide services, maintenance and management of a guided missile system to a number of countries including Saudi Arabia. This weapons order is a result of a previously announced weapons contract with the Royal Saudi Naval Forces. 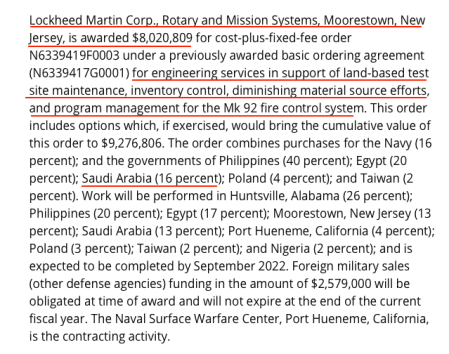 Turkish police say the murder of Khashoggi was carried out by a 15-person hit squad—including a forensic expert known for pioneering rapid and mobile autopsies—dispatched from Saudi Arabia. An American intelligence official described the operation as possibly being an attempted “rendition”. Both Turkish and US officials have described existence of video and audio recordings they say prove Khashoggi was brutally murdered in the Saudi consulate. The team is alleged to have used a bone saw to cut the body into pieces and smuggle it out of the embassy.

In an attempt to diminish the political crisis, the Trump administration, in coordination with the Saudis, has been pushing the idea that the murder was a rogue operation to interrogate and kidnap Mr. Khashoggi. Yet, many US officials believe the Saudi crown prince, Mohammed bin Salman (MBS) must have ordered any operation involving an interrogation or murder inside the country’s consulate.

President Trump—who has received millions of dollars from Saudi sources for real estate sales and hotel rentals—had made some vague threats of punishment for the gruesome murder; however, Trump has said he’s not interested in cutting off US arms transfers to Saudi Arabia. For years, the Kingdom has been the largest buyer of US weapons.

Human rights groups have complained for years that US arms sales to Yemen are being used to commit atrocities. Earlier this week, a US-backed Saudi air strike reportedly hit a bus full of civilians killing 17 people, including women and children.

Despite the long US-Saudi partnership, the suspected murder of Mr. Khashoggi, a legal US resident and well-connected, DC-based journalist, has caused a major uproar in Washington DC.

Senators Rand Paul and Chris Murphy have both renewed their calls for cutting of US arms transfers to Saudi Arabia. Sen. Bernie Sanders has called for ending all US support for Saudi Arabia’s war in Yemen, which has killed tens of thousands and pushed millions to the brink of starvation.

The Senate Foreign Relations Committee has demanded that Trump investigate the Saudi regime’s role in the incident through the Global Magnitsky Act, which could result in sanctions.

Sen. Lindsay Graham has said “this MBS figure to me is toxic” and “He can never be a world leader on the world stage. . . . This guy has got to go.”

Mr. Khashoggi was a longtime insider in Saudi politics, but had recently become somewhat critical of the Saudi crown prince.

According the Washington Post, the US intelligence community was aware of a plot by the crown prince to lure Khashoggi back to Saudi Arabia where he would be arrested.

The Trump administration has claimed to have no prior knowledge of any Saudi plot against Mr. Khashoggi. Yet, White House advisor Jared Kushner is known to be close the Saudi crown prince.

Despite the shocking nature of Mr. Khashoggi’s alleged murder, it may not have been the first time the Saudi regime has used a consulate or embassy to conduct an operation against a political enemy.

According to recent reports, a number of Saudis living abroad report receiving calls from the embassy, which they believe were attempts to lure them into the embassy. Others say they are too afraid to leave their homes for fearing a kidnapping. Some are even refusing to visit Saudi embassies to renew their passports out of fear of what could happen, essentially leaving them stranded abroad.

Aides of outspoken Saudi Prince Sultan bin Turki said in 2016 that the prince was lured onto a royal private jet where he was drugged and flown to Saudi Arabia. The prince has not been seen in public since his kidnapping

Khaled bin Farhan al-Saud, a Saudi prince living in Germany claims that a little over a week before Mr. Khasoggi went missing, the Saudi regime used his family to try to lure him to Cairo.

In previous years, there have been allegations of Saudi princes being abducted and flown back to Saudi Arabia where they’re imprisoned.

According to the Human Rights Watch, thousands of Saudis have been detained without trial in the country, with some imprisoned for over decade.

In Saudi Arabia, the regime is using torture to “suppress all dissent and imprison human rights defenders”, according to the UN. The UN states “between 2009 and 2015 more than 3,000 allegations of torture were formally recorded.” The torture methods documented included “electric shocks, sleep deprivation, prolonged periods of solitary confinement, and beatings to the head, face, jaw, and feet.”