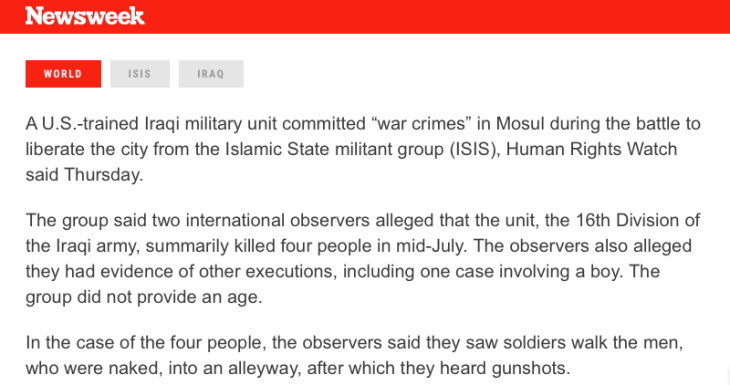 It shouldn’t surprise us that the US or US proxy forces commit atrocities. The US supports militant groups to fulfill its ends, it’s not interested in human rights. The history is clear on this.
The US military itself has a long history of the torture and other atrocities. In the US colonial war in the Philippines in 1898 the US tortured captives using a form of water torture called “water cure“.
More recently, of course, is the Bush administration’s use of CIA black sites, Guantanamo, and Abu Ghraib. The Obama administration spoke a lot about ending torture, but it blocked the release of the Senate Intelligence report on torture and made large use of drone assassinations.
Trump has called for the return of waterboarding and has vowed to fill up Guantanamo bay. Just last month, AP reported that US forces are interrogating Yemeni detainees in facilities where UAE forces are conducting torture. In Cameroon, Amnesty International reported that US troops are present as US-trained forces are carrying out torture.
The US-supported jihadi groups in Syria were supported by the US, and Persian Gulf allies, because they believed these groups could be used to overthrow Assad. The result they hoped for would be a Syrian government that is obedient to the US and Persian Gulf countries. However, the attempt has so far failed. The effort has, however, caused unimaginable destruction and devastation for the people of Syria.
As is predictable, the US-supported rebels engaged in beheadings, torture, and other rights abuses. Yet the US media  pushed the narrative that these “rebels” were freedom fighters. But the truth is these were radical groups fighting alongside al Qaeda, and who were not a whole lot different from al Qaeda. The arms the US provided these groups even ended up in the hands of groups like al Qaeda.
If Trump’s claim that he ended support for the jihadist rebels in Syria is true, this is a very positive development. It will allow the Syrian government to continue defeating the jihadists and begin creating stability in Syria. In one sense, Trump seems to be rightly focusing on defeating ISIS, instead of empowering them in Syria. Yet at the same time, he continues to obsess over isolating and weakening Iran and Hezbollah, two important members of the coalition fighting ISIS.
In Iraq, US troops seem to be keeping silent about executions and torture they are witnessing from US-trained Iraqi troops they are embedded with. It’s important that the US push out ISIS from Mosul, Trump doesn’t seem to particularly care if a large number of civilians are killed. More evidence of this is the huge increase in civilian casualties that has come about from US airstrikes in the battle against ISIS across Iraq and Syria.